By ILethabo (self media writer) | 1 month ago

Aircraft are machines that can carry both people and cargo at tremendous speeds while flying at great heights in the stratosphere layer of the earth. It is safe to say that this is one of the greatest feats of engineering in human history. Bird strike, which occurs when a fast-moving airplane collides with birds, is only one of the many ways in which aircraft can be damaged or rendered ineffective. 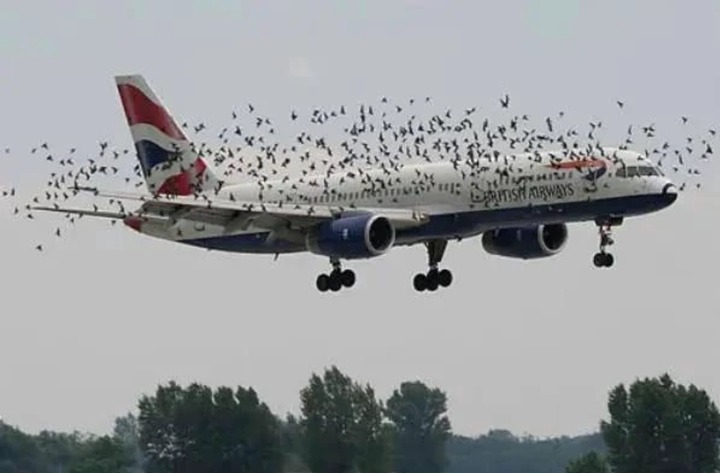 Although you may have observed both birds and aircraft in the skies, has the thought ever crossed your mind about the likelihood of a bird or flock of birds colliding with a rapidly moving plane? So that we don't waste any more of your time, let me to explain briefly.

Most planes cruise at incredibly high altitudes, and the only time you'll see one at a low height is right before it touches down or takes off. Collisions are more likely to happen at low altitudes, which is where birds typically fly.

Even though a single bird striking an aircraft has no effect on the plane and only results in the instant death of the bird, if a flock of birds runs into an aircraft, such as an airplane taking off or landing at high speed, the impact can cause significant damage to the plane and the birds, who also perish instantly.

The pilot will be sucked out of the plane if the windshield breaks after being struck by a flock of birds because the force of the impact will crack the glass and the wind or air pressure will continue to beat against the screen until it breaks. Furthermore, if the cabin pressure becomes unsteady, the plane can experience a roll and eventually crash. The pilot promptly calls for an emergency landing following a bird strike to avert further damage.

When birds fly into aircraft engines, they can be severely damaged if they are sucked in between the blades and shattered. This phenomenon is known as engine ingestion and can cause the blades to hang or stop working, which in turn affects the engine and causes it to shut down, leaving the aircraft with the option to glide and crash. A skilled pilot and a bit of luck, though, may be able to guide the plane to the nearest airport for a safe emergency landing.

But that will do a lot of damage to the engines.

Commercial airlines have implemented a number of procedures to reduce the frequency and severity of bird strikes on their aircraft. Bird decoys and robotic birds are two methods used to divert birds from the flight paths of airplanes during takeoff and landing.

Content created and supplied by: ILethabo (via Opera News )

Crucial Next Few Weeks For Pirates Star, Future To Be Decided?

The Nurses are on strike and they locked the clinic. Details