No Russia, no world' Putin pundit ramps up threat to US 'We will use our nuclear forces’

By Kingofnews (self media writer) | 4 months ago

Dmitry Kiselyov, Russia's senior propagandist, has warned that the government is prepared to use nuclear weapons against the US, stating that Washington is attempting to "totally demolish our country and cancel it."

After stating that the US aims to wipe Russia out of existence, Russia's chief propagandist Dmitry Kiselyov warned the US with a hypothetical nuclear attack. The propagandist can be seen citing a Russian decree that appears to allow the use of nuclear weapons if "the state" is "threatened" by other countries, as well as arguing that a world without Russia is unnecessary.

"There were many occurrences this week demonstrating that relations with America are growing increasingly heated," Kiselyov remarked.

"There's the intelligence saying with Ukraine, as well as the new sanctions and a lot more."

"It's clear that the United States' goal is not just to restrain Russia, but to fully destroy it, to cancel it, in modern terminology.

"There is such a frenzy among the ruling Democrats in Washington that they are directly proclaiming that America is battling Russia and cannot lose during arguments regarding the extraordinary amount of help to Ukraine - now tens of millions of dollars. 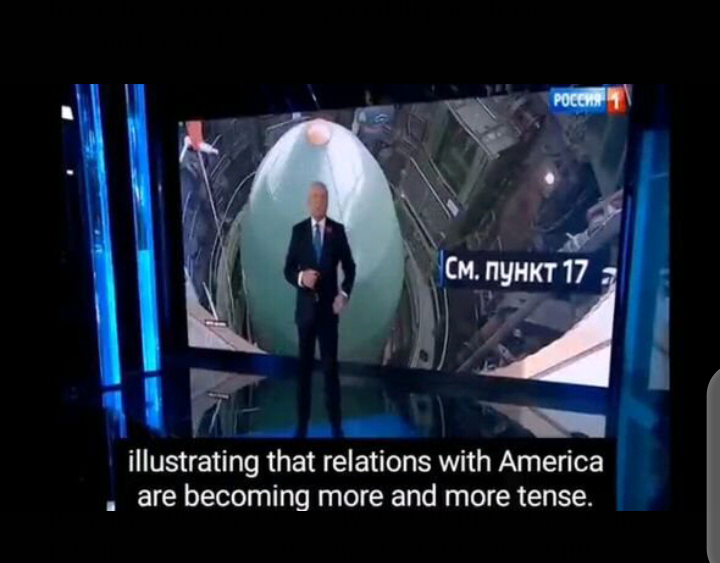 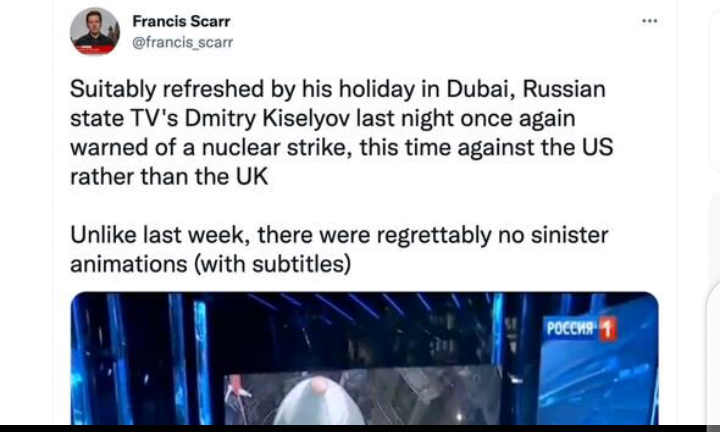 To back up his assertions, Kiselyov displayed an excerpt from an American TV Special Report in which US Representative Seth Moulton is quoted as saying, "We're not only at war to defend the Ukrainians.

"We are fundamentally at war with Russia, albeit through a proxy, and it is critical that we prevail.

"But Russia cannot lose either," Kiselyov concluded after watching the American TV clip.

"If it comes down to it, Putin's logic comes into play: 'Why do we need such a world if there is no Russia in it?' 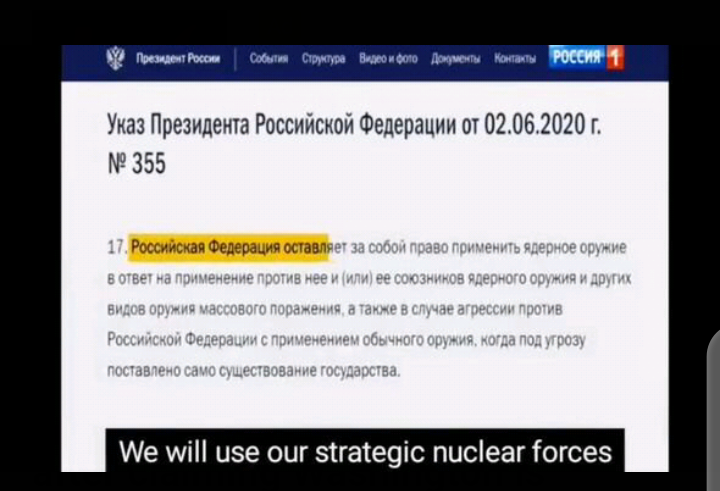 Dmitry Kiselyov, a propagandist, shows an excerpt from a Russian regulation that appears to legitimize the use of nuclear weapons. (Photo credit: @FrancisScarr)

"And look here at Point 17 of the order on the Foundations of Russia's State Policy in the Area of Nuclear Deterrence," he said, to justify the use of nuclear weapons to the Russian public in the event of a threat from the US or other countries.

"We will deploy our strategic nuclear capabilities 'when the state's basic life is threatened," he said, citing the treaty.

"Suitably revived by his holiday in Dubai, Russian state TV's Dmitry Kiselyov last night once again warned of a nuclear strike, this time against the US rather than the UK," wrote BBC journalist Francis Scarr on Twitter.

"Unfortunately, there were no sinister cartoons this week, unlike last week. 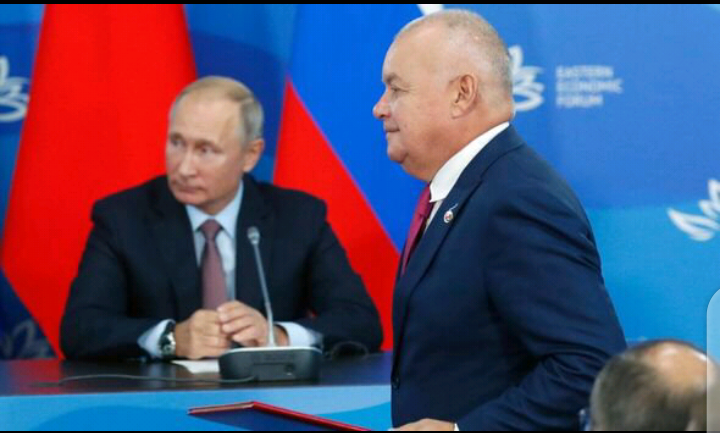 Mr Scarr linked to a prior excerpt from the same Russian TV channel, in which Russian propagandist Dmitry Kiselyov threatened the UK with the use of "an underwater Poseidon nuclear weapon" by Russia "to plunge Britain into the depths of the sea" on his Sunday night show.

The film, which was carried live on Russian television, also included detailed images of a possible Russian nuclear attack, which appear to be missing from the current video warning against the US.

Kiselyov justified the threats by alleging that Prime Minister Boris Johnson had previously threatened to attack Russia with nuclear weapons.

Instead, the threats are thought to be the result of the UK's continuous military and financial assistance for Ukraine since the Russian invasion began.

Share this unique article across all social media platforms and please don't forget to maintain social distance, wear your face masks, wash your hands regularly with sanitizer for prevention is better than cure.

Thanks for reading, the topics covered here are available for positive progress and critical assessments. Please do well to drop a comment below and share the article with as many as possible

Content created and supplied by: Kingofnews (via Opera News )

A "positive exchange" between Ramaphosa and the ANC's integrity commission has been confirmed.

7 Signs That God Is Angry With You.

Tendai Ndoro cleared his SAn ex-wife of any wrong doing

Dudula Members In Trouble After Invading Zims Bush Church. See What Is Going To Happen To Them

Cyril Spotted Sitting Among His Branch Members In Soweto