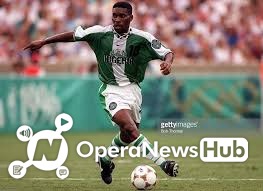 Did you ever see this guy play? He was simply awesome! It was such a delight to watch him display some magical skills. You can’t just fathom what next Jay jay could do with the ball. With his trademark step over dribble and robot kicks, Jay jay scored most of his 84 career goals through direct free kicks and more than 1010 assist. He was made to release a DVD titled, “Super skills with Jay jay,” where he taught difficult football skills to young and upcoming players.

While introducing Jay jay to fans in 1998, the President of PSG, Charles Biétry said, “We have been able to sign the football maverick from Nigeria and we hope he stays in our team in the next four years or so.” The Paris club signed Okocha for $24 million, one of the highest sign on fee in the world then. 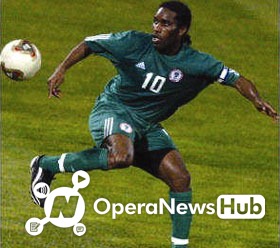 In spite of his incredible performances that saw Nigeria win Africa Cup of Nations in 1994 and also Gold medal In the men soccer event at Olympics 1996, Okocha didn’t win the prestigious AF”s Africa football player of the year award.

At his best years, Okocha walked under the shadows of players like Samuel Eto’o, Mustapha Hadji and indeed, Didier Drogba of Cote d’ivoire, the eventual winners of the award in 1998, 2003 and 2004.

Anyone who ever saw Jay jay play would be tempted to question the CAF rating procedure. Especially in the future when roll call of African greats like Roger Miller, George Weah, Abedi Pele Ayew, Nwankwo Kanu, all past winners of the award, one may by oversight forget that there once existed a football maverick called Austin Okocha.

Some football analyst were of the opinion that Okocha played too much to the gallery and lacked ball winning skills required of a midfielder at the big stage. For this reason, Okocha may have been reduced to sitting at the bench in most of PSG’s UEFA Champions League games in 2000.

Each year Okocha was at his best, there was indeed another African player that may have done better for club and country. Therefore Okocha was relegated to runners up in two occasions and placed third in another edition of CAF’s footballer of the year award.

Mikel Obi and the others that failed to replace Okocha