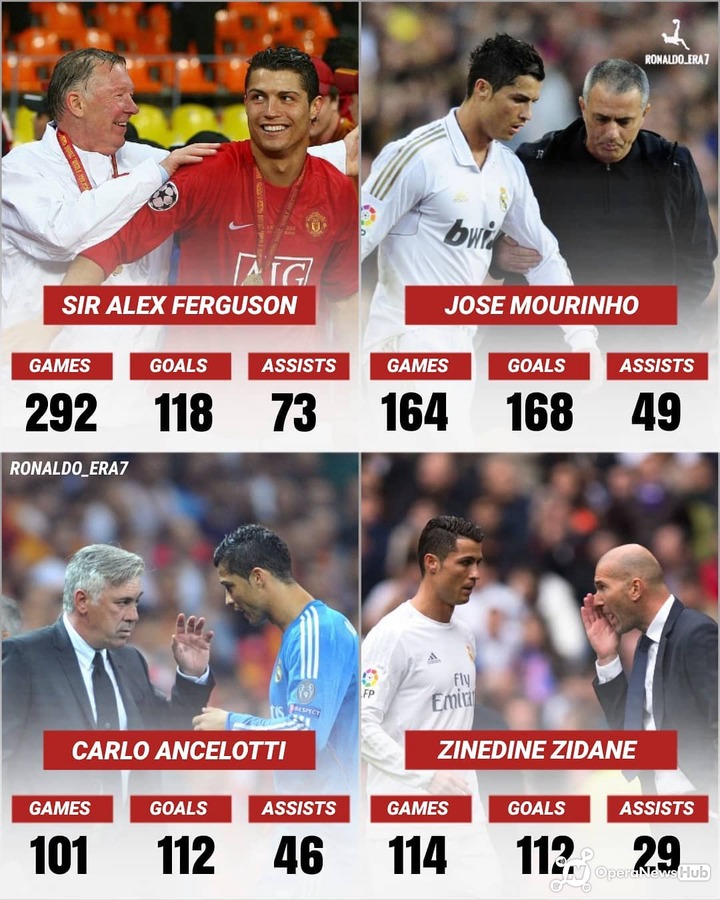 The 35years old Cristiano Ronaldo dos Santos Aveiro GOIH ComM is a Portuguese professional footballer who plays as a forward for Serie A club Juventus and captains the Portugal national team. Cristiano Ronaldo plays with great passion and team for every Club he has ever played for.

he has done great in Manchester United and became there legend, he played in Real madrid and became legend by carrying champions league three times at a once, he is currently playing for Juventus now he is doing great.

Cristiano Ronaldo under the time of Sir Alex Ferguson, Sir Alexander Chapman Ferguson CBE is a Scottish former football manager and player who managed Manchester United from 1986 to 2013. He is considered one of the greatest managers of all time and he has won more trophies than any other manager in the history of football. Cristiano Rinaldo made 292 apperance he scored 118 goals and assisted 72 times under Sir Alex Ferguson.

cristiano Ronaldo under Jose Mourinho,in Real Madrid he Made a total apperance of 164 times and scored168 goals with 49 assists.

Carol Ancelotti, cristiano Ronaldo has made 101 appearance and has scored 112 goals and did 46 assist under Ancelotti.

Battle For Swag: Between Lionel Messi And Cristiano Ronaldo Who Has More Swag? (Photos).

10 Reasons Why Lionel Messi Is Better Than Cristiano Ronaldo