1. Whoever says:’La ilaha ‘illa Allaahu wahdahu la shareeka lahu, lahul mulku wa lahul hamdu wa huwa ala kulli shayin qadeer’ One hundred times in one day, then it is equivalent to him freeing ten slaves, a hundred good deeds are written for him, a hundred bad deeds are erased, it is a protection for him against shaytaan during that day until the evening, and no one comes with a better deed than him except for the man who does more actions than him.

2.Whoever enters the marketplace and says: ‘There is none worthy of worship except Allah who has no partners, for Him is the Dominion, and for Him is all Praise, He brings life and He causes death, and He is Alive and does not die, in His Hand is all good, and He is able to do all things,’ [La ilaha ill-Allah, Wahdahu la sharika lahu, lahul-Mulk, wa lahul-Hamd, yuhyiyy wa yumit, wa Huwa Hayyun la yamut, bi Yadihil-Khayr wa Huwa ‘ala kulli shay’in Qadir]then Allah will write one million good deeds for him, and will wipe away one million of his bad deeds, and will raise him one million levels and will build a home for him in Paradise.” [‘Sahih al-Jami’ #6231]

3. “Whoever reads [Surah Ikhlaas] until he finishes it ten times, then Allaah builds a Palace for him in Paradise as well as additional benefits. ‘Umar said: ‘Then we will have a lot of Palaces, O Messenger of Allaah!’ The Prophet — salallaahu ‘alayhi wa sallam — said: Allaah has more and what is better.” [Silsilah Ahadeeth as-Saheehah by Shaykh al-Albaani №589] 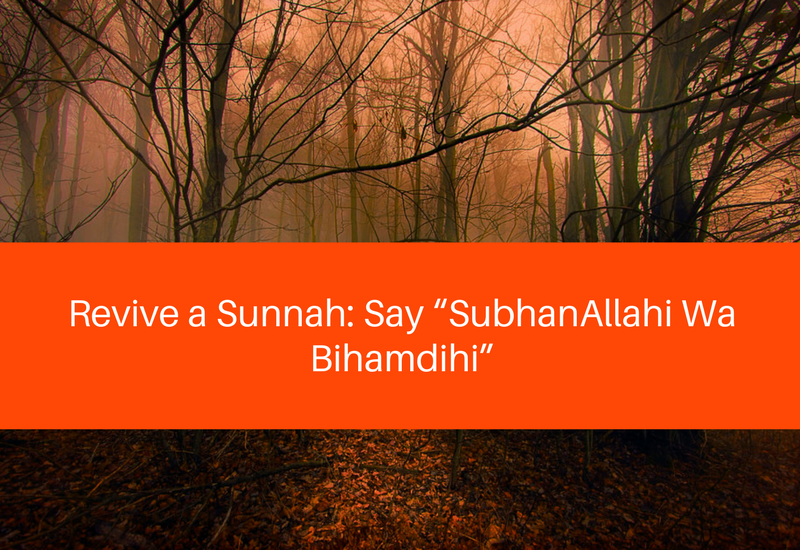 4. “Whoever says: ‘Glorified is Allah, the Most Great, and praised is He’ [Subhan Allah al-’Adhim wa bi-Hamdih] will have a date palm planted for him in Paradise.”[‘Sahih al-Jami’ #5531]

5. Whoever says Subhana allaahi wa bihamdihi -One hundred times in one day, then his mistakes / sins are cancelled out, even if they are like the foam on the ocean.

6. The Messenger of Allaah -sallAllaahu alayhi wa sallam- said: Is one of you so weak that he cannot acquire a thousand good deeds everyday? So a questioner from amongst those sitting there asked him: How can anyone of us gain a thousand rewards? He said: say: — “Far is Allaah from imperfection and all praise is for him” — “Subhana allaahi wa bihamdihi” A hundred times, so a thousand good deeds are written for him or a thousand sins are cancelled for him. 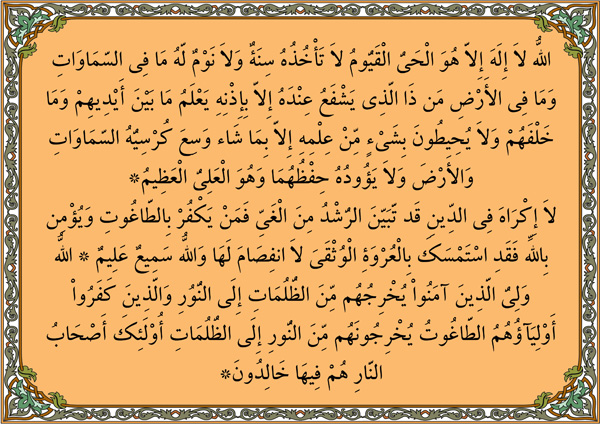 7. It was narrated that Abu Umamah (may Allah be pleased with him) said: The

Messenger of Allah (peace and blessings be upon him) said: “Whoever recites Ayat Al-

Kursi immediately after each prescribed Prayer, there will be nothing standing between

him and his entering Paradise except death.”

8. “Whoever ate something, then said: ‘Praise be to Allah who has fed me this food and provided it for me, without any strength or power on my part’ [al-Hamdu lillah aladhi at’amani hadha wa Razaqnih bi ghayr hawlin minni wa la quwwa] is forgiven his past and future sins.

9. And whoever wears a garment and says: Praise be to Allah who has clothed me with this garment and provided it for me without any strength or power on my part [al-Hamdu lillah aladhi kasani hadha at-thawb wa Razaqnih bi ghayr hawlin minni wa la quwwa] is forgiven his past and future sins.” [‘Sahih al-Jami’ #6086] 9. ‘Abdullah bin Mas’ud said: ‘Whoever reads ‘al-Mulk’ (chapter 67 of the Qur`an) every night, Allah will protect him from the torment of the grave. At the time of the Messenger of Allah (peace be upon him), we used to call it al-mani’ah (that which protects). In the Book of Allah, it is a chapter which — whoever recites it every night — has done very well.” [‘Sahih at-Targhib wat-Tarhib’ #1475]

11. “Whoever asks Allah sincerely for martyrdom [Allahumma inni as’aluk ash-shahadah], Allah will cause him to reach the status of the martyrs even if he dies in his bed.” [‘Sahih al-Bukhari’ #1909]

12. “Whoever wishes that his provision be increased and his age lengthened, let him maintain the ties of kinship.” [Bukhari and Muslim]

14. “Prayer in congregation is superior to praying individually twenty-seven times.” [Bukhari and Muslim]

16. “The most superior prayer of a person is in his home, except for obligatory prayers.” [Bukhari and Muslim]

17. “Whoever Ghassala (washes his head, and it is said: has intercourse with his wife so that it be a means to lower the gaze from the Haram that day) on the day of Jumu’ah, then comes in the earliest time and before the first Khutbah, walks and doesn’t ride, stays near the Imam, listens and does not speak — for each step [he makes] he has actions of one year, the reward of fasting and standing in prayer in it.” [Ahl As-Sunan]

18. “Whoever prays Al-Ghadah (i.e. Fajr) in congregation, then sits remembering Allah until sunrise, then prays two units of prayer(salatul ishraq/duha), has a complete reward of Hajj and ‘Umrah [The Prophet (Peace and blessings be upon him) repeated ‘complete’ three times for emphasizing].” [Ath-Tirmidhi, classed as Sahih by al-Albani]

19. “Whoever goes to the mosque not desiring except to learn or teach what is good has the reward of a pilgrim who completed his Hajj.” [At-Tabarani, classed as Sahih by Al-Albani]

20. “‘Umrah in Ramadan is equal to a Hajj with me ( with Prophet (Sallallahu alaihi wassalam).” [Bukhari]

21. “Whoever leaves his home in a state of purity to perform obligatory prayer, his reward is like that of a pilgrim (while) in the state of ihram [i.e. he receives reward similar to that of spending time in ihram during Hajj].” [Abu Dawud, classed as Sahih by Al-Albani]

23. “Allah and His Angels make Salawat upon [the people of] the first row.” [Ahmad, with a good Isnad]

25. “Whoever seeks forgiveness for believing men and believing women, Allah will write for him a good deed for each believing man ad believing woman.” [At-Tabarani, classed as Hasan by Al-Albani]

26. “That I walk with my Muslim brother in [fulfilling his] need is dearer to me than being in I’tikaf in the Masjid for a month.” [Ibn Abi Dunya, classed as Hasan by al-Albani]

27. Indeed the major supplication for forgiveness is to say

So if the worshipper says this when the morning arrives, truly believing in it

and he dies, enters Paradise, and if he says this when the evening arrives

truly believing in it enters Paradise.

There is not one from amongst the worshippers, that if he says, in the

wa huwa ‘as-samee’ul –‘aleemThree times nothing harms him what so ever.

Who ever recites the last two Ayaat from Soorah al-Baqarah at night, then

those two verses will be sufficient for him.

Shall I not show you what will be better for you than a servant? When you

lie down on your bed, say SubhanAllaah 33 times, say al-hamdulillaah 33

Who ever wakes up at night, and says: -

Then he says : O Allaah forgive me (Allaahumma aghfirlee), or he

supplicates and his supplication is answered, and if he makes Wudu and

prays then his prayer is accepted.

32. Abu Huraira reported: The Messenger of Allah (peace and blessings be upon him) said: Anyone amongst you who sat in a place of worship waiting for the prayer is in prayer and his ablution is not broken, the angels invoke blessing upon him (in these words): O Allah! pardon him. O Allah! have mercy upon him. [Sahih Muslim]

Our Lord –Tabarak wa Ta’ala- descends every night to the lowest heavens,

when there remains the last third part of the night, and He says who is there

that supplicates to me so that I may answer his supplication, who is there

that asks of me so that I may grant him what he asks for, who is there that

seeks my forgiveness so that I may forgive him.

you and your family.

36. hose who sleep in a state of purity. Imam Ibn Hibban narrated from Abdullah Ibn ‘Umar -may Allah be pleased with him- , who said that The messenger of Allah -peace and prayer of Allah be upon him- said, “Whoever sleeps while he’s in purity state(wudu), the angel will accompany him in his garment. He will not wake up until the angel pray, ‘O Allah, forgive your slave so and so since he is sleeping in purity state.’” (Classed sahih by Sheikh Al Albani in his work “Shahih At Targhib wat Tarhib”, I/37)

Please share it so that others will benefit. Thanks

10 Oldest Mosques in the World

How to See Prophet Muhammad PBUH in Dream (What its Means)

The importance of Jerusalem in Islam.