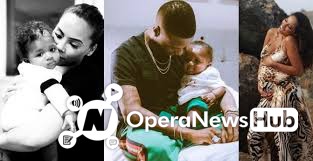 Popular artist Wizkid’s manager and mother of his third child, Jada Pollock recently opened up on how and when she met the singer a few years back. The beautiful Jada said she met the Starboy boss in Lagos, Nigeria in 2012 while he was on tour with International singer, Chris Brown.

The singer’s manager and baby mama made this known during a question and answer session with her fans on Instagram. During the Q&A session, she revealed some other interesting and fun facts, like what her Nigerian food which she said is Suya.

The single mother of one revealed she plans on taking her lovely son on a dinner date after the corona virus ban comes to an end. Pollock is the most active of wizkid's baby mamas. She has worked with several popular figures as a brand manager and image consultant, including footballers such as Didier Drogba. Before she met Wizkid through Chris Brown several years ago, she had already become successful in her career.

Wizkid's Mansion Vs Davido's Mansion: Which is More Beautiful?[Photos]

Wizkid's Son, Zion is All Grown Up and Handsome(Pictures)

We all know that Wizkid is cute, but checkout photos of a Nollywood actor who is cuter than Wizkid