7 Nigerian celebrities that look way older than their real age

So after a careful study and research I present to you 7 Nigerian celebrities that look way older than their real age.

Regina Daniels is a Nollywood actress, producer, philanthropist and a television personality. She was born on 13th May 2000 and is currently 19 years old as of 2019 but she looks like a 28 years young woman. Regina Daniels is originally from Delta State in the south southern part of Nigeria. She is currently married to Nigerian billionaire Senator Ned Nwoko. She is also an undergraduate of Igbinedion University Okada, Edo State, Nigeria, where she is studying Mass Communication. She has starred in over 150 Nollywood movies. Some of the movies she has acted include Spider Girl, Twins Apart, Miracle Child, Fish Girl, Python Girl, Hanging Coffin, Jaja the Great, Queen Rebecca, Royal Covenant, Stronger than the Gods, amongst others. She always acts as a child actress and plays the role of a spiritual possess child in several Nollywood movies.

Charity Eke Faani popularly known as Chacha Eke is a Nollywood actress and a television personality. She was born on 1st May 1993 and is currently 26 years old as of 2019 but she looks like a 35 years young woman. Chacha Eke is originally from Abakaliki, the capital city of Ebonyi State in the south eastern part of Nigeria. She attended ESUT Nursery and Primary School in Ebonyi State and Our Lord Shepherd International School in Enugu State both in the south eastern part of Nigeria and obtained both her First School Leaving Certificate and West African Senior School Certificate. After which she attended Ebonyi State University in Abakaliki and graduated with a Bachelor’s Degree in Accountancy.

Michael Collins Ajereh popularly known by his stage name as Don Jazzy is a famous Nigerian singer, songwriter, recording artiste, record producer, entrepreneur, investor and a music producer. He was born on 26th November 1982 and currently 36 years old as of 2019 but he looks like a 45 years young man. He is originally from Umuahia, Abia State in the south eastern part of Nigeria. He grew up with his three siblings in Ajegunle in Lagos State, Nigeria. He started singing when he was 4 years old. At the age of 12 years old, Don Jazzy began to play the drums, bass guitar and traditional instruments. Don Jazzy completed his primary school education in Ajegunle, Lagos State, Nigeria. After which he attended Federal Government College in Lagos, Nigeria. After that, he attended Ambrose Ali University Ekpoma in Edo State, Nigeria and graduated with a Bachelor’s Degree in Business Management.

David Adedeji Adeleke popularly known by his stage name as Davido is a famous Nigerian singer, songwriter, recording artiste, model and a record label owner. He was born on 21st November 1992 and currently 26 years old as of 2019 but he looks like a 33 years young man. Davido is originally from Osun State in the south western part of Nigeria. His father is a billionaire and Nigerian business magnate while his late mother was a university lecturer. He completed his primary school education in Atlanta, Georgia in the United States of America. After which he returned to Nigeria and attended British International College in Lekki, Lagos, Nigeria. After completing his secondary school education, Davido attended Babcock University in Ogun State, Nigeria and graduated in 2015 with a Bachelor’s Degree in Music. He is currently the Chief Executive Officer (CEO) of Davido Music Worldwide (DMW).

Chika Ike is a Nollywood actress and a television personality. She was born 8th November 1985 and currently 33 years old as of 2019 but she looks like a 39 years young woman. Chika Ike is currently the United Nations ambassador and the CEO of Fancy Nancy Collections. She began her career as a model at the age of 16 years old before joining the Nigerian movie industry (Nollywood). After her primary and secondary school education, Chika Ike got admitted to University of Lagos in 2004 to run a 2-years diploma program in Human Kinetics and Health Education. She began acting in her local church drama at a very tender age of 6 years old. In 2005, Chika Ike joined the Nigerian movie industry (Nollywood) and acted in her first movie “Sweet Love” which brought her to limelight. In 2006, she completed her diploma program in University of Lagos and went further to get a degree in human kinetics and health education in University of Lagos

Damini Ogulu popularly known by his stage name as Burna Boy is a famous Nigerian Afrobeat and reggae-dancehall singer, songwriter, stage performer and a recording artist. He was born on 2nd July 1991 and currently 28 years old as of 2019 but he looks like a 40 years young man. Burna Boy is originally from Ahoada, a small town in Rivers State in the south southern part of Nigeria. He is the only son of his parents and being the eldest of three siblings comprising of girls only. He came from a family who appreciated music but prioritized education. He spent most of his summer holidays in the United Kingdom. Burna Boy attended Montessori International primary school in Port Harcourt, Rivers State, Nigeria. After which he attended Corona Secondary School in Lagos, Nigeria and obtained his West African Senior School Certificate in 2008.

Eniola Badmus is a Nollywood actress and a television personality. She was born on 7th September 1983 and currently 35 years old as of 2019. But she looks like a 46 years young woman. Eniola Badmus was born in Lagos, Nigeria. She had her basic and secondary school education in Ijebu Ode, Ogun State, Nigeria. She has a Bachelor’s Degree in Theatre Arts from University of Ibadan and a Master’s Degree in Economics from the University of Lagos. Eniola Badmus career in acting professional started in the year 2000 until in 2008 when she shot to recognition upon starring in two Yoruba films titled Jenifa and Omo Ghetto. Both movies are instrumental to her rise to fame in the Nigerian entertainment industry which has since seen her star as both lead and supporting actress in several Yoruba and English films. 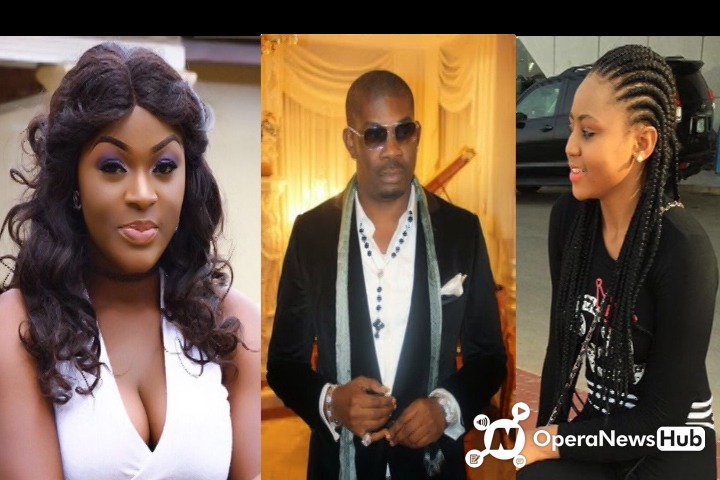 Odunlade Adekola vs Ibrahim Chatta: 2 reasons why Ibrahim is better.

See The Side Hustle of Your Favourite Nollywood Stars (Photos)