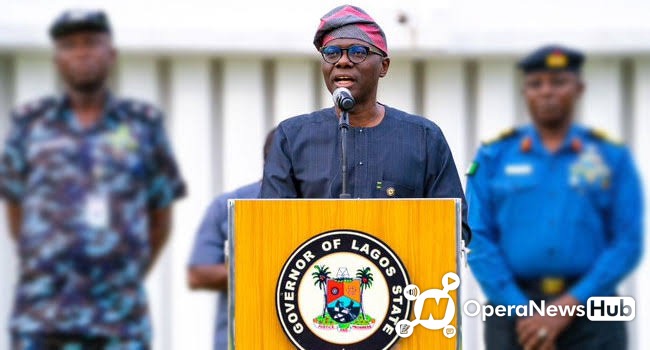 Lagos State Governor Mr. Babajide Sanwo-Olu on Tuesday announced the state government's plan to begin daily feeding of youths in the state as a result of the lockdown caused by the Coronavirus pandemic.

The governor also ordered total clampdown on the robbers and hoodlums  terrorising the state.

He made the announcement at the State House, Marina, at the end of a security meeting with security agencies.

The feeding initiative comes under the Food Kitchen Daily programme of the state government.

The governor who dangles the axe on the hoodlums while giving update on  the COVID-19 management in the state described the robbers as opportunistic saying anyone caught in the act would have himself to blame.

"In the next couple of days, we will commence a daily “Food Kitchen” program which will see us aim to feed about 100,000 people daily.  This will largely target the youths. We are identifying local food vendors who will pilot this program and ensure that the process of cooking and serving of the meals adhere strictly to public health guidelines," he said.

On reported cases of armed robberies in the state, the governor said:

"This brings me to the issue of the seeming rise in unrest in the metropolis and boundary communities.

It is very apt that we have just concluded an emergency Security Council meeting this afternoon, in which all the various heads of the state’s security agencies were present.  At this meeting, we discussed the increasing reports of crime and criminality across the metropolis as cultists, miscreants and other criminals have sought to take advantage of the lockdown to unleash havoc on our people.

"One of our key responsibilities as an administration is the safety and security of the lives and properties of all citizens, and we will not abandon this responsibility at any time. There is no room whatsoever in Lagos State for criminal gangs or miscreants of any kind.

"In fact, over 100 suspects have been arrested in the last 72 hours on account of disturbances.  All the suspects have accordingly been charged to court.

‘’Let me assure you that those miscreants that you may have seen in the videos going viral are not hungry people; they are not acting on the basis of hunger. They are opportunistic criminals, and they will be treated as such by the law enforcement agencies."

He commended the federal government for its support to the state, adding the state government have been in close and constant communication with the Federal Government on the issue of hoodlums, saying the IGP has deployed a Deputy Inspector General of Police, who is a seasoned crime fighter, to Lagos as our Intervention Squad Coordinator to help devise and superintend over a superior strategy to curtail and stem the perceived and actual threat of violence.

He  added that with the new rapprochement  Lagosians will see an increase in mobile police deployment in all trouble spots in the metropolis; as well as the police intensifying their patrols around residential areas, boundary communities, and other critical areas of activities during this lockdown period.

This, he said, will be carried out in conjunction with other security agencies  such as Army; Navy; Airforce and Directorate of State Security Service.

He also "issued an order to the Police; LASTMA and the VIO to release all impounded vehicles arrested for minor traffic offences from the 1st of March 2020 to date.  This directive takes effect following the end of the lockdown.

Pictures: 6 Special Police Units That Can Track Down Any Criminal

We have zero tolerance for crime, says AIG Iliyasu

Cult Groups Plans Their 7/7 Operation On Tuesday 7th July - Police Warns Them Over The Operation.